Wisconsin Radon Services offer several types of Radon Test Monitors to provide you with reliable results in a timely manner.  We also offer Long Term Testing to encompass the change of seasons/ weather patterns and other Environmental Factors when time permits to give you accurate results at reasonable cost. 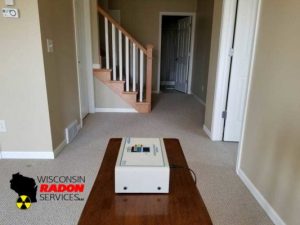 Wisconsin Radon Services utilize two major brands of Short Term Electronic Continuous Monitors (Rad Star and Sun Nuclear).  These are called Active Radon Monitors.  They need power to function and have battery backups.  They provide and store hourly samples of radon levels.  These levels allow the flucuation of Radon levels to be seen over time.  They are equipped with tamper alarms (to ensure they are not moved once the Radon Test has begun).  A short term electronic test typically lasts from two – seven days. Short Term tests provide a, “snapshot” of radon levels throughout the testing period.  While reliable, they cannot provide a year-round average

WRS also has Liquid Scintillation devices which are user friendly for testing at a later date. With a shelf life of over several years they may be stored for testing at a future location/time. Once an Active Radon Mitigation System has been installed the EPA recommends a retest every two years. Based on customer requests we now offer these as well. They are easy to operate and cost effective. Some homes may have multiple areas in need of testing. A single home with concrete slab (addition after house was built) and a finished basement for example. They come with postage paid packaging. These tests are performed for 48-96 hours.

WRS now provide long term passive radon test kits (Alpha Track). These tests kits provide test samples from 90 – 365 days. Long Term Tests capture the best, “year round” average as radon levels fluctuate throughout the year due to the Change Of Seasons, Barometric Pressure Differences, Changes in Soil, Foundation (as home ages). Your home can act like a vacuum with doors and windows closed up in the winter, pulling higher amounts of Radon up from the ground through the concrete foundation. Long Terms Tests are a great way to find out what you are breathing in as these levels change throughout the year.

SCHEDULE A RADON TEST OR ASK A QUESTION »»