Protect Yourself From Vapor Intrusion

Protect Yourself From Vapor Intrusion

Protect yourself & your loved ones from dangerous vapor intrusion

Vapor intrusion (VI) of radon gas has been recognized as a potential cancer risk for more than 30 years. 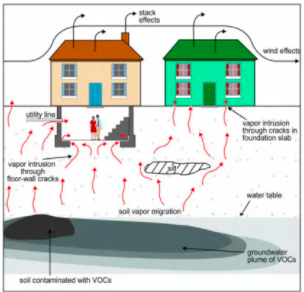 Vapor intrusion occurs when there is a migration of vapor-forming chemicals from any subsurface source into an overlying building. Recognition of soil vapor intrusion to buildings and other enclosed spaces occurred in the 1980s with concerns over radon intrusion.

Subsequently, there was an increasing awareness that anthropogenic chemicals (e.g., petroleum hydrocarbons and chlorinated solvents) in soil, groundwater, and sewers and drain-lines could also pose threats to indoor air quality via the vapor intrusion pathway.

The figure to the right depicts the migration of vapors in soil gas from contaminated soil and groundwater into buildings. Vapors in soil gas are shown to enter buildings through cracks in the foundation and openings for utility lines. Atmospheric conditions and building ventilation are shown to influence soil gas intrusion.

SCHEDULE A RADON TEST OR ASK A QUESTION »»